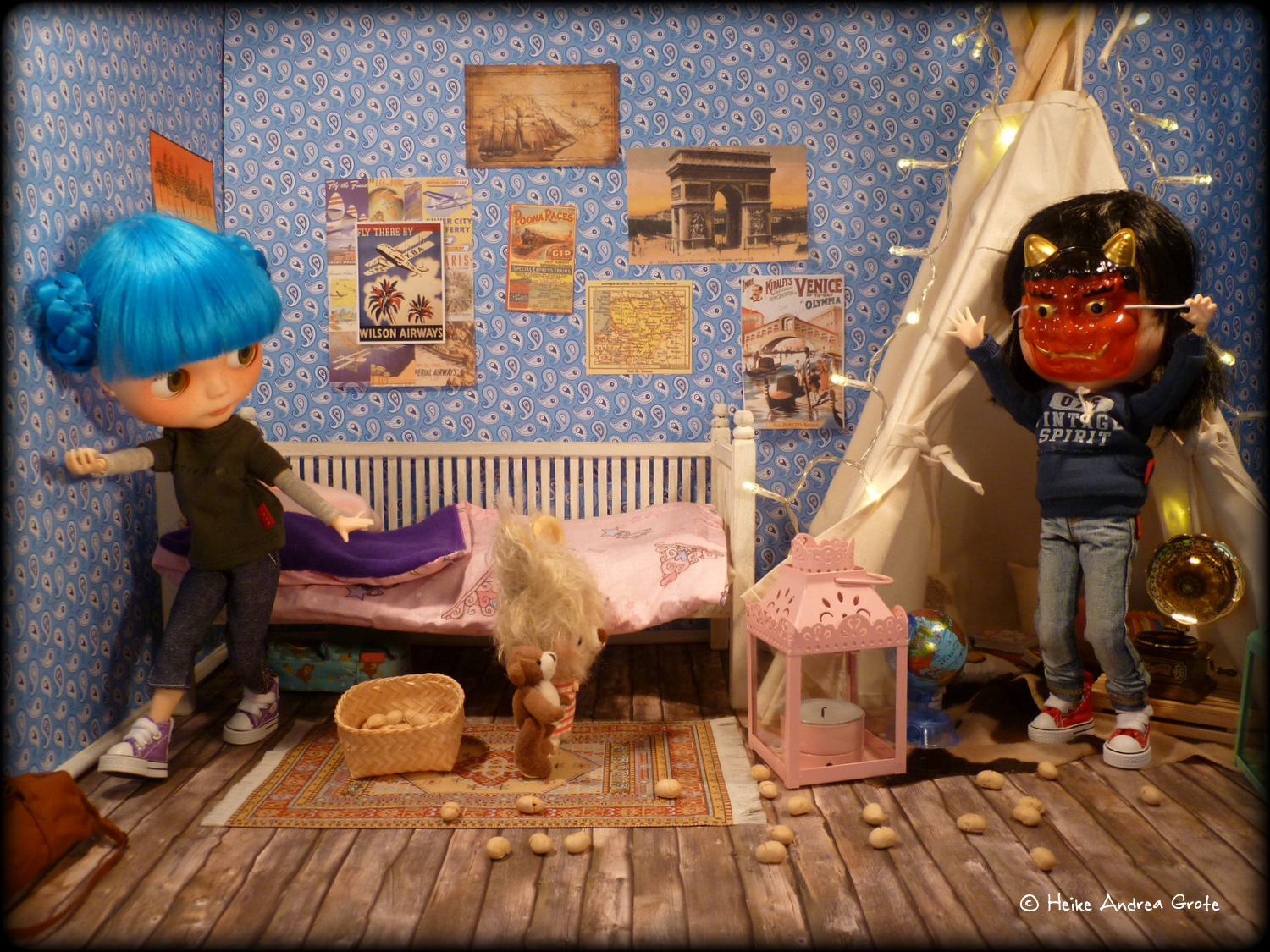 Mamemaki with Bluebelle and Dylan.
Mr. Fuzzy Fabulous and Sir Lee Scoresby are anxiously waiting, that the demon will disappear.

Setsubun (Bean-Throwing Festival or Bean-Throwing Ceremony) is the day before the beginning of Spring in Japan.
It is celebrated around February 03. It is a festival that welcomes spring.
Spring Setsubun can be and was previously thought of as a sort of New Year's Eve.

Setsubun is accompanied by different traditions:
Mamemaki
A special ritual to cleanse away all the evil of the former year and
drive away disease-bringing evil-spirits for the year to come
is called mamemaki (豆 撒き ) (literally "bean throwing").

Makizushi
Another custom at Setsubun is to eat uncut makizushi called Eho-Maki. It is a long roll of sushi. 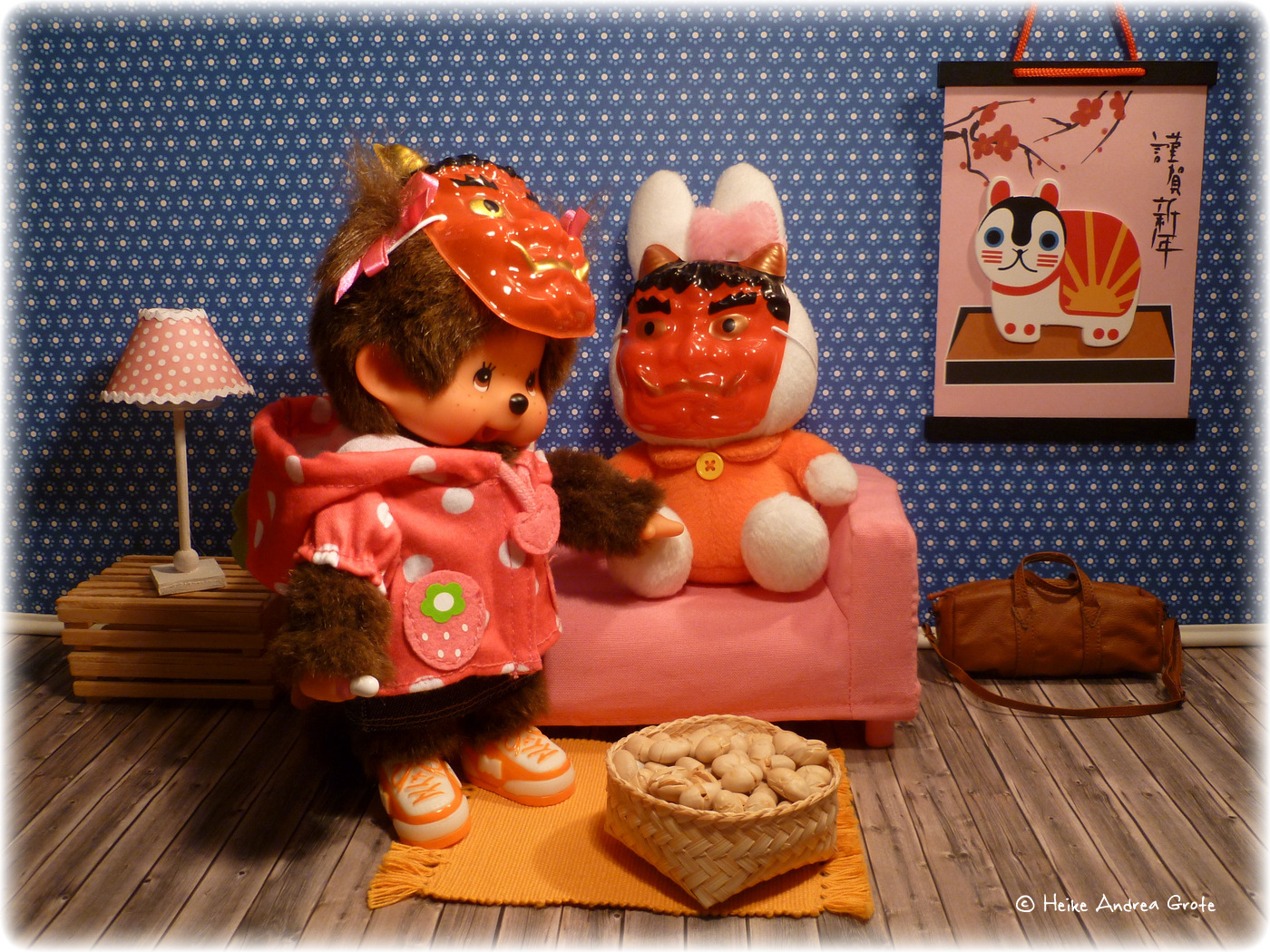 Cherry: „But Miffy...one of us HAS to throw the beans. Not everyone can be the demon!“ 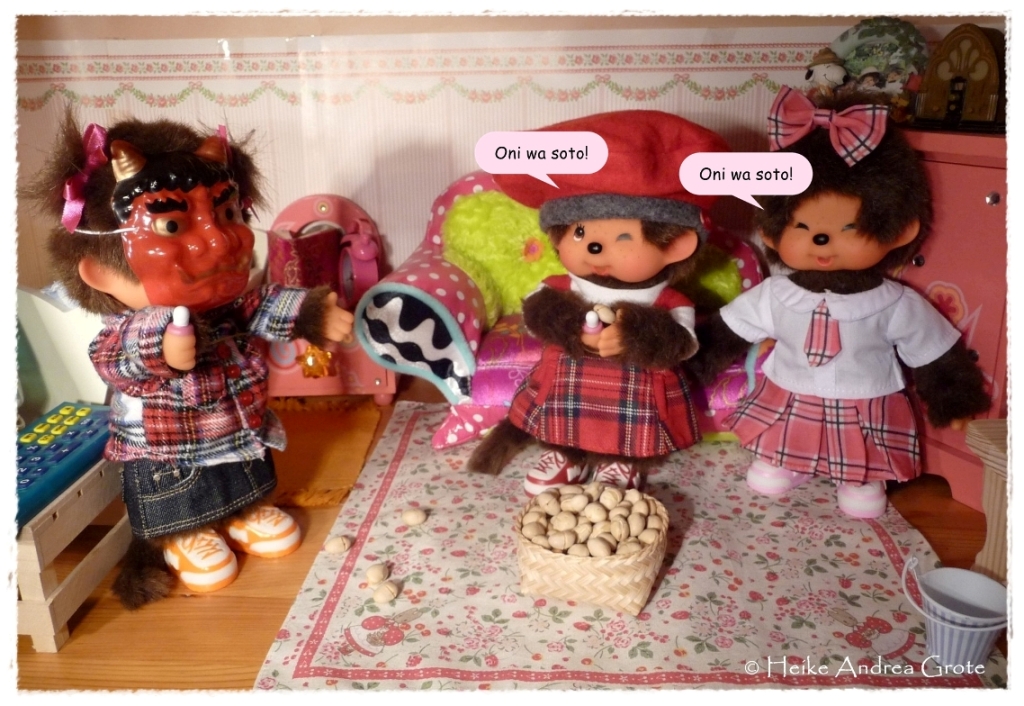 Roasted soybeans are thrown either out the door or at a member of the family wearing an Oni (demon) mask,
as he or she tries to get into the house, while the people in the house say “Oni wa soto! (Demons out!)”. 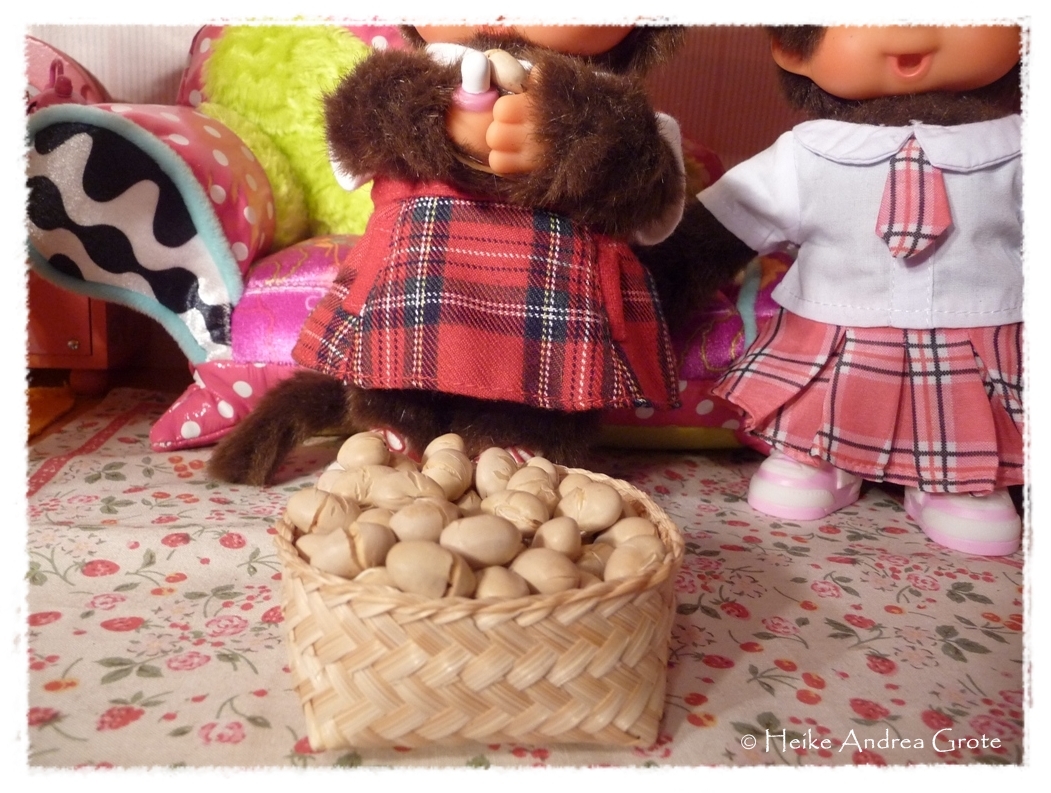 Then people have to eat as much soybeans as old as they are. 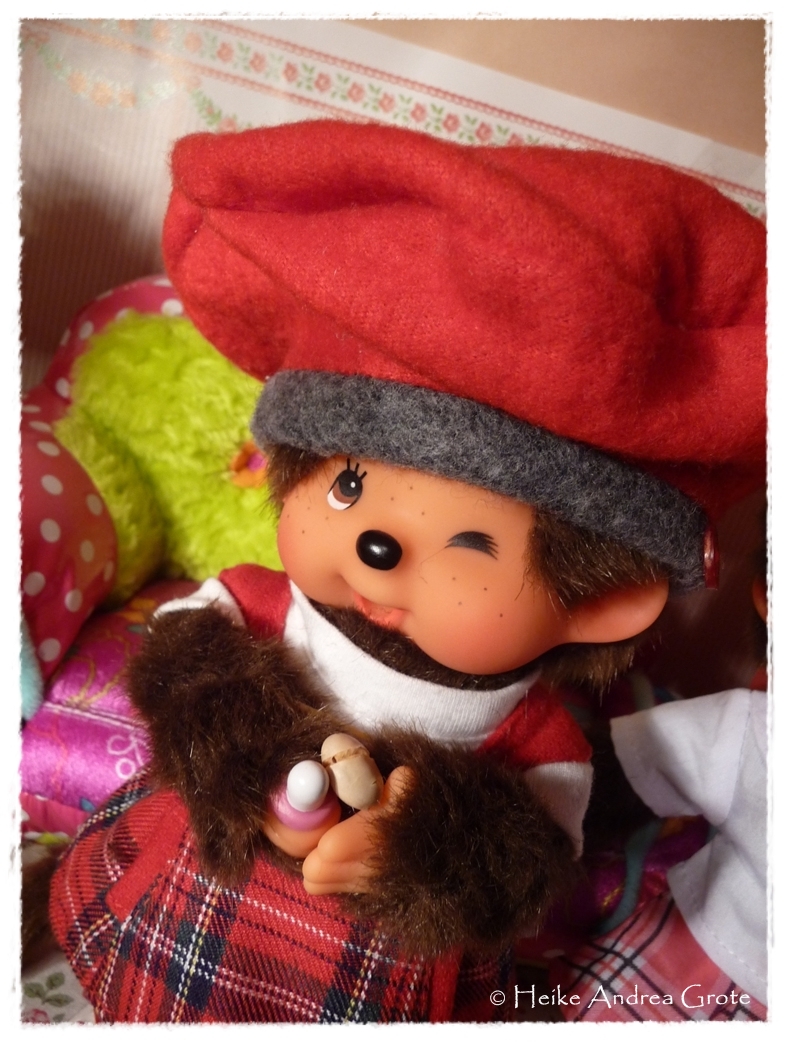 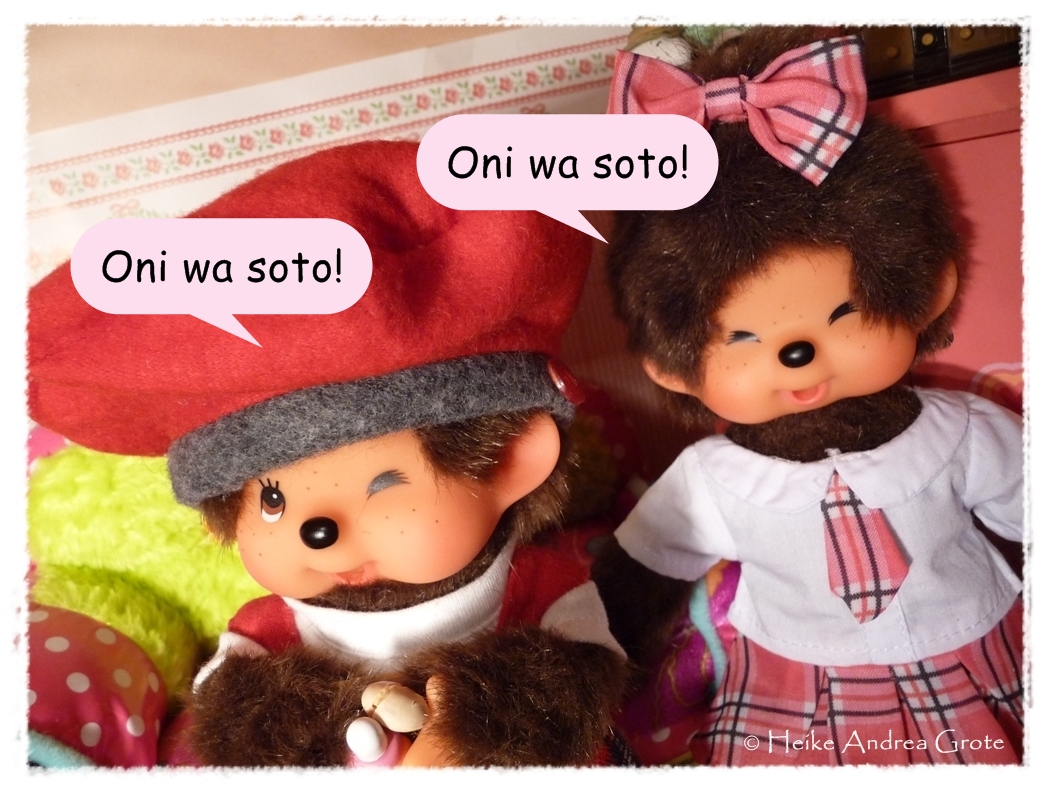 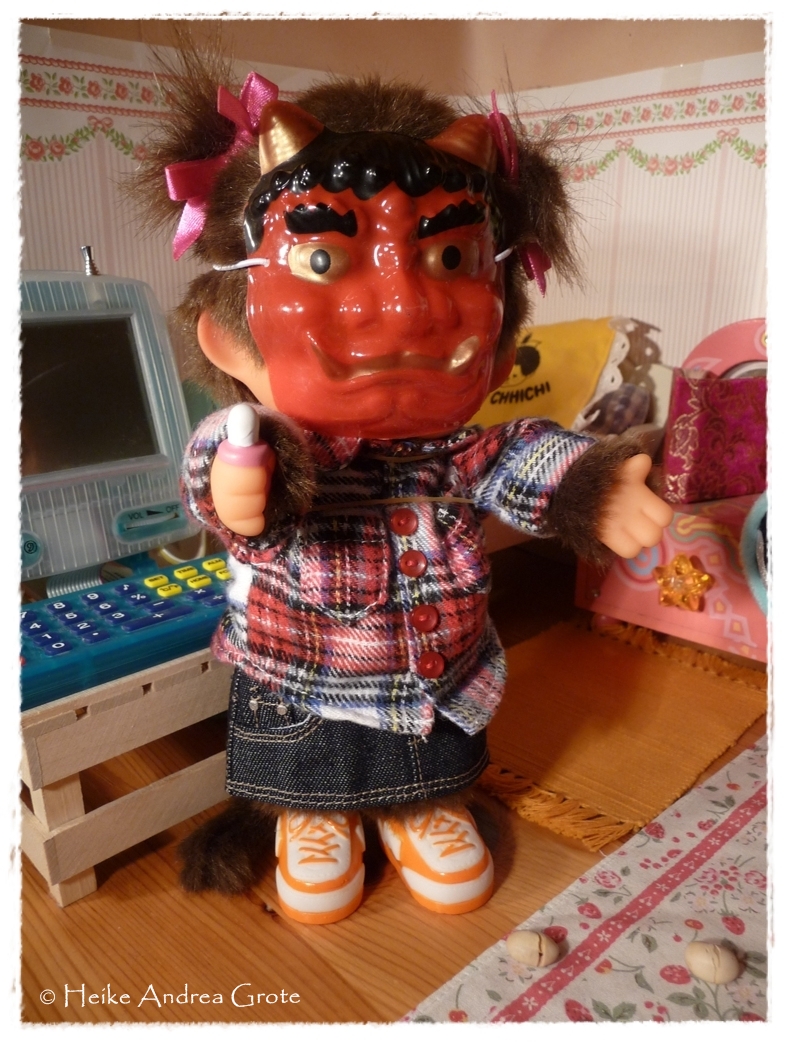 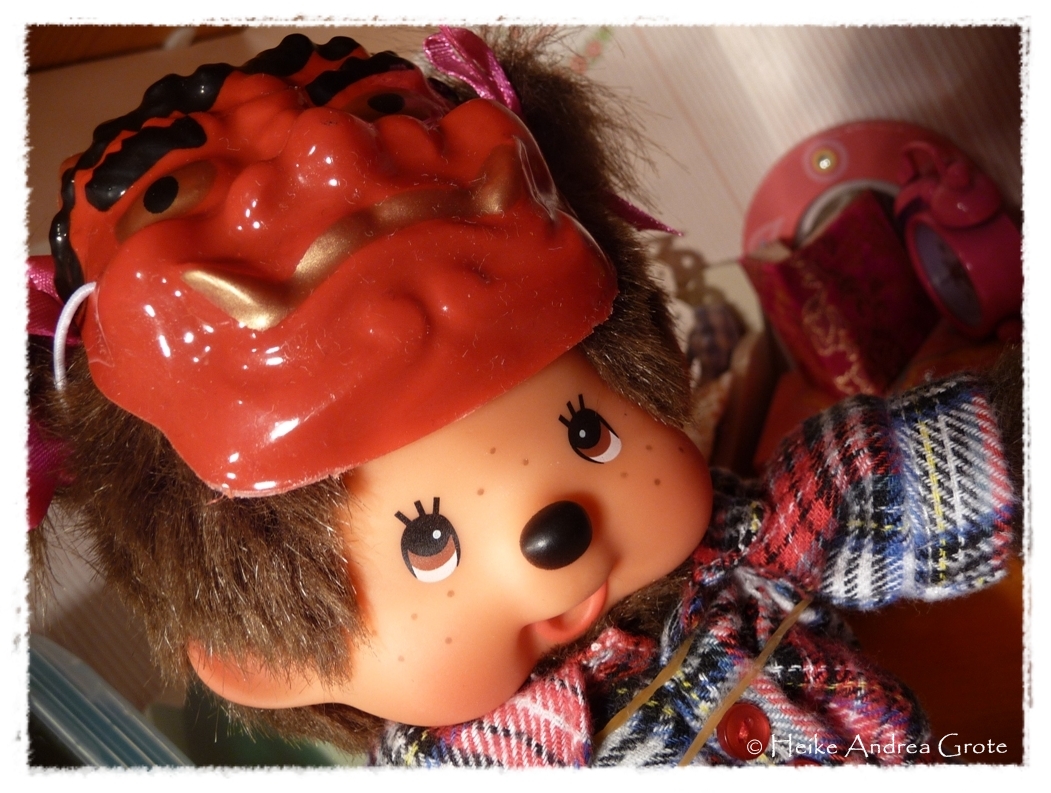 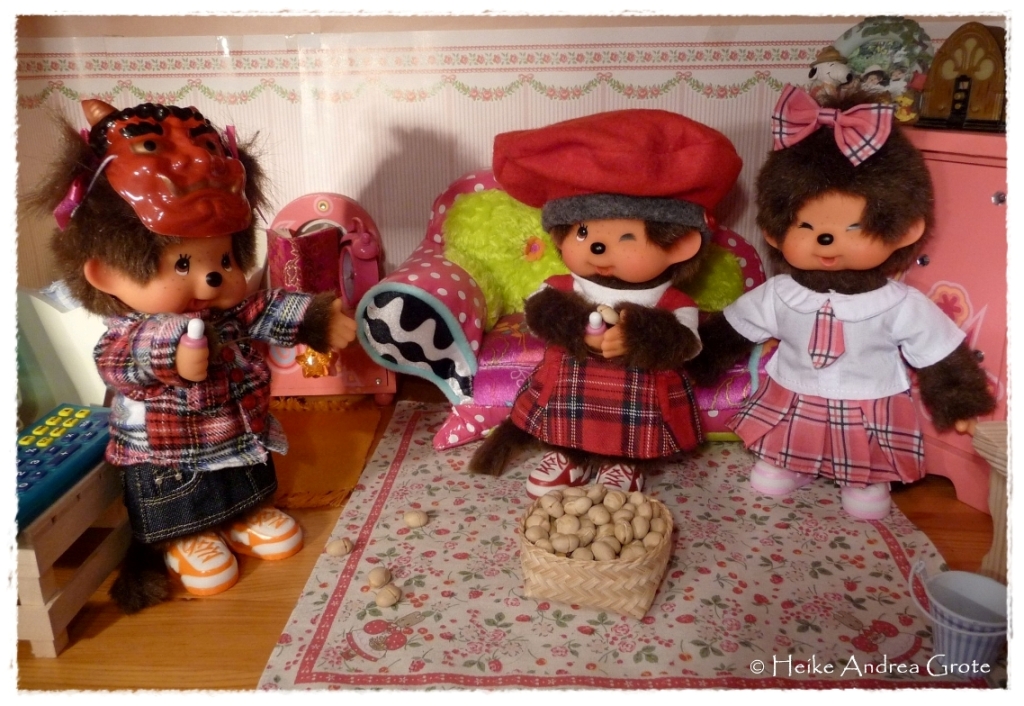 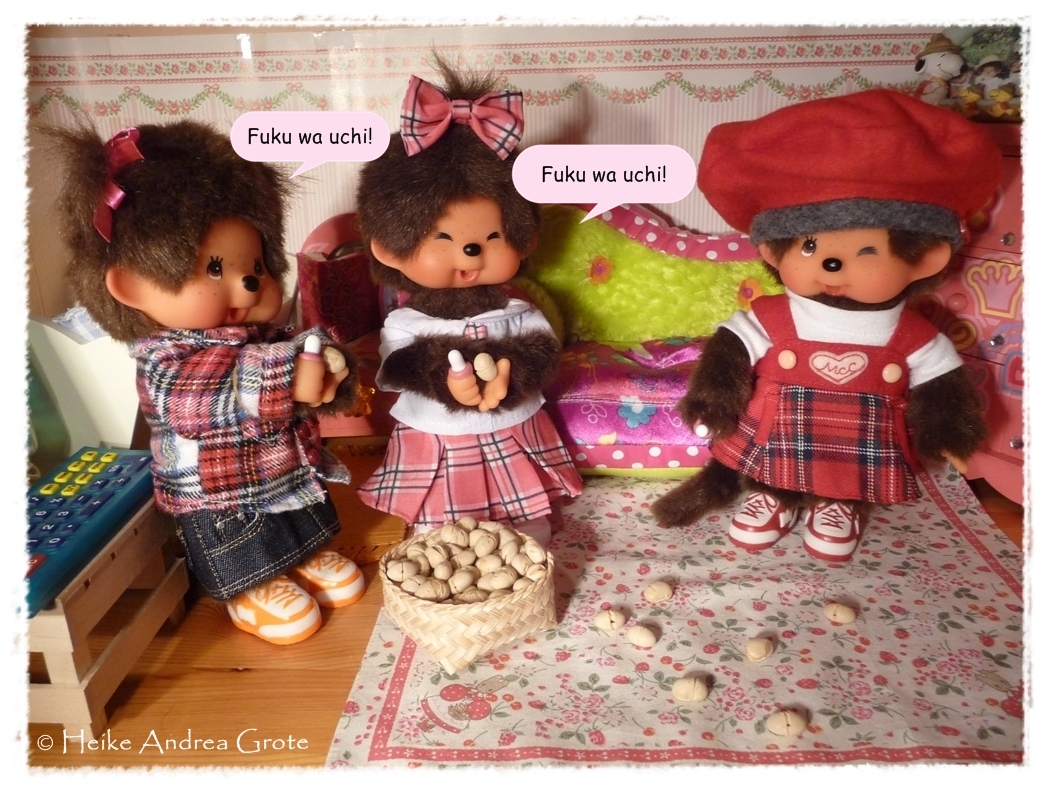 Then the people change the place and stay in front of their entrance door and
throw the soybeans into the house and say “Fuku wa uchi! (Luck in!)". 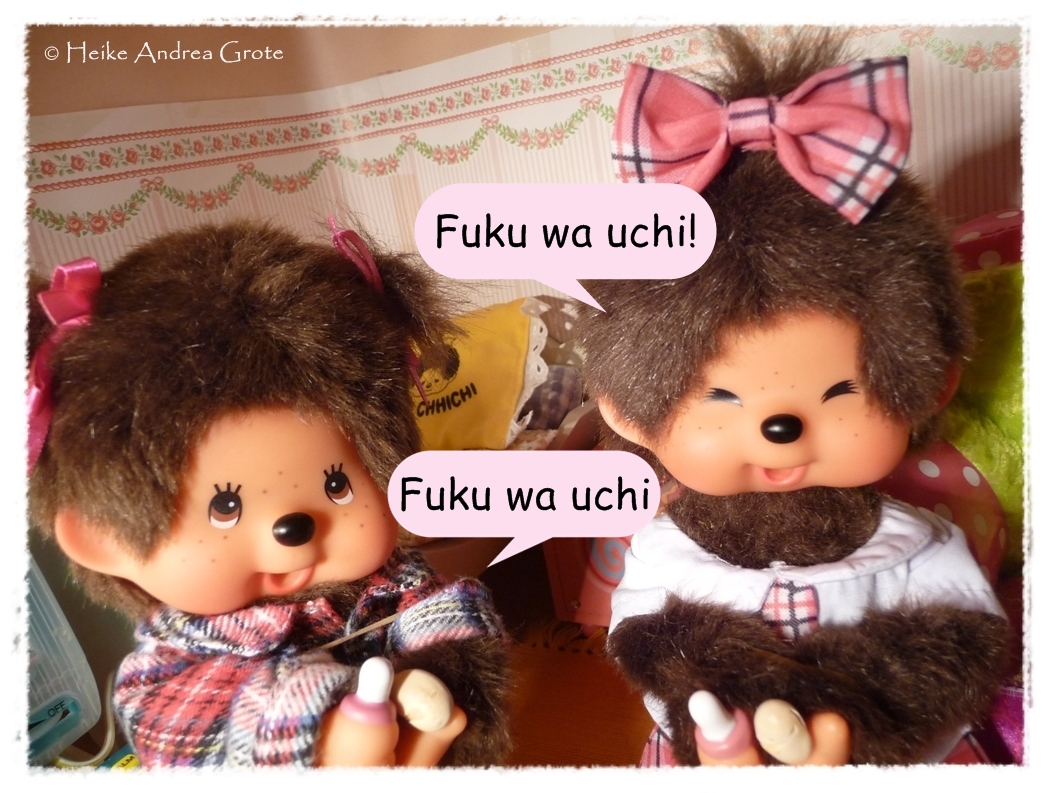 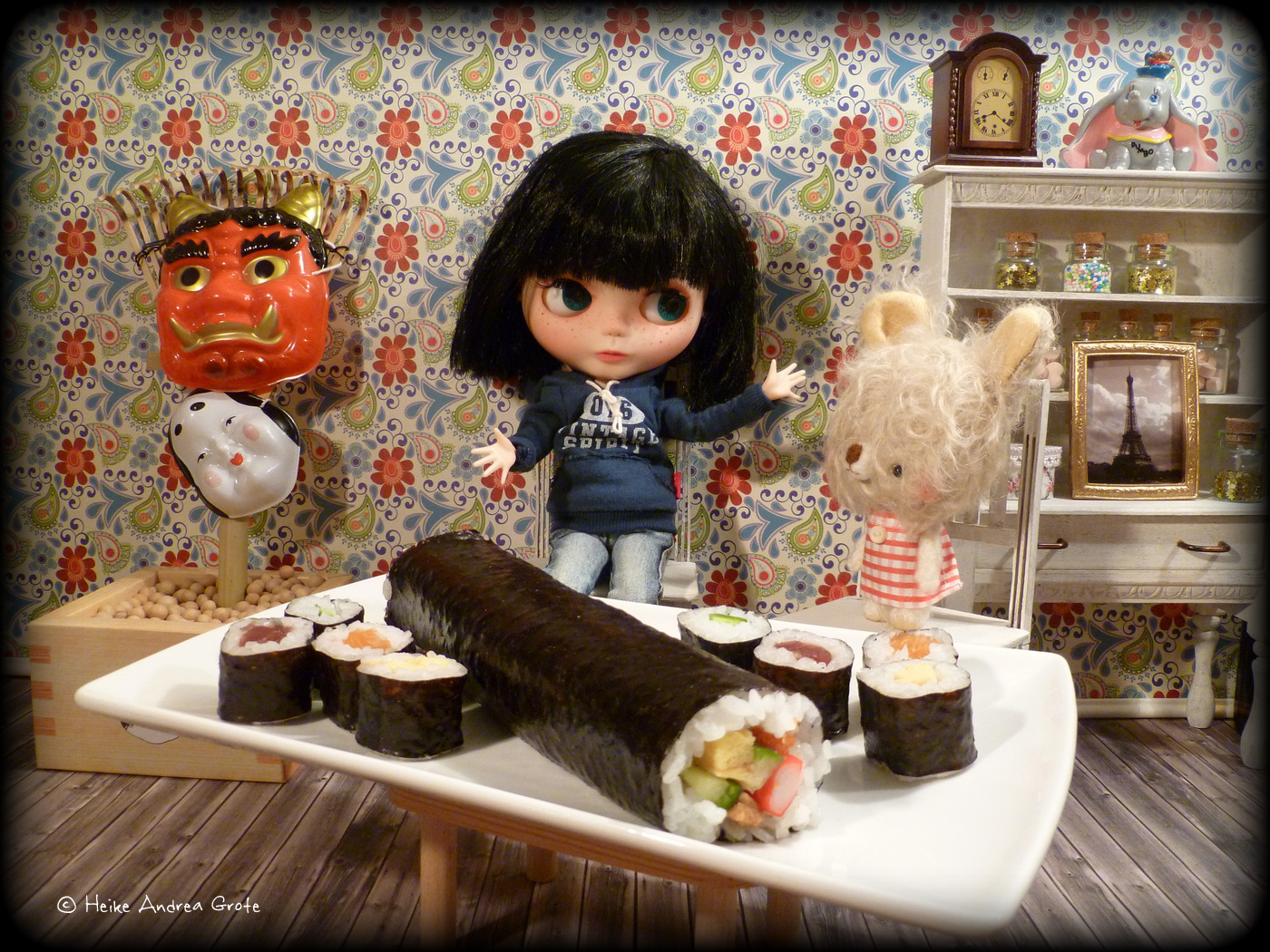 Dylan and her Makizushi challenge.

Mr. Fuzzy Fabulous invited Dylan to a Setsubun dinner,
where he presented her his homemadeEho-Maki. 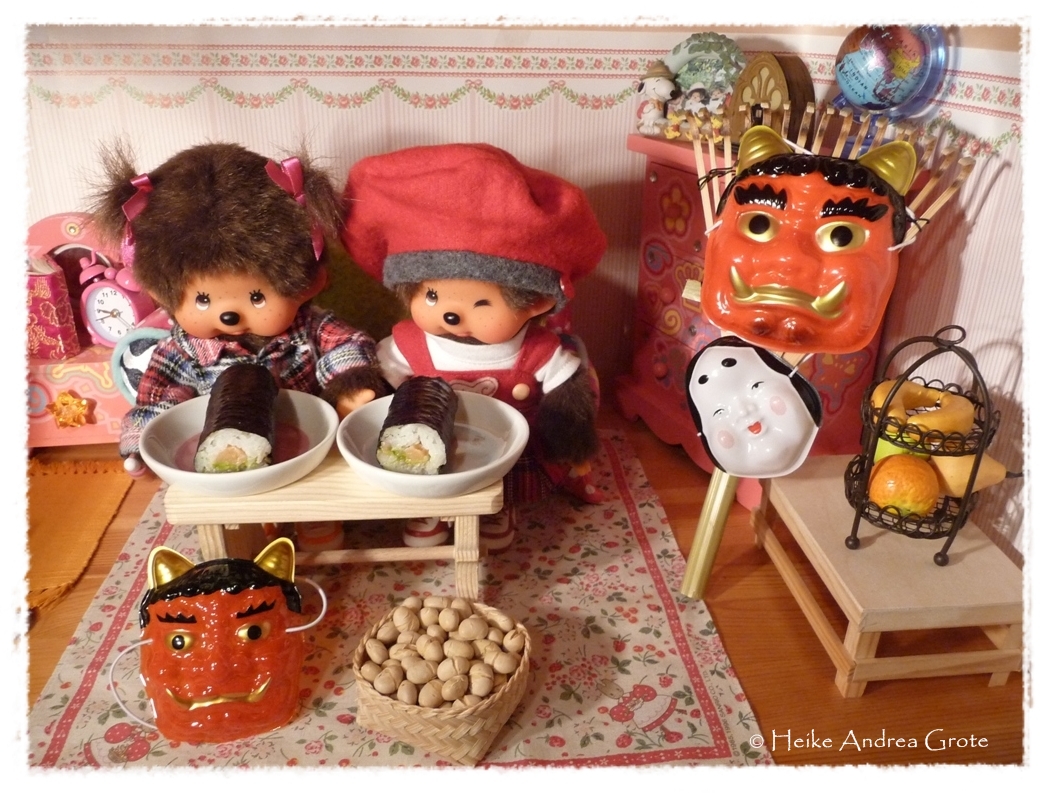 Another custom at Setsubun is to eat uncut makizushi called Eho-Maki (恵 方巻) (lit. "lucky direction roll").
It is a long roll of sushi. 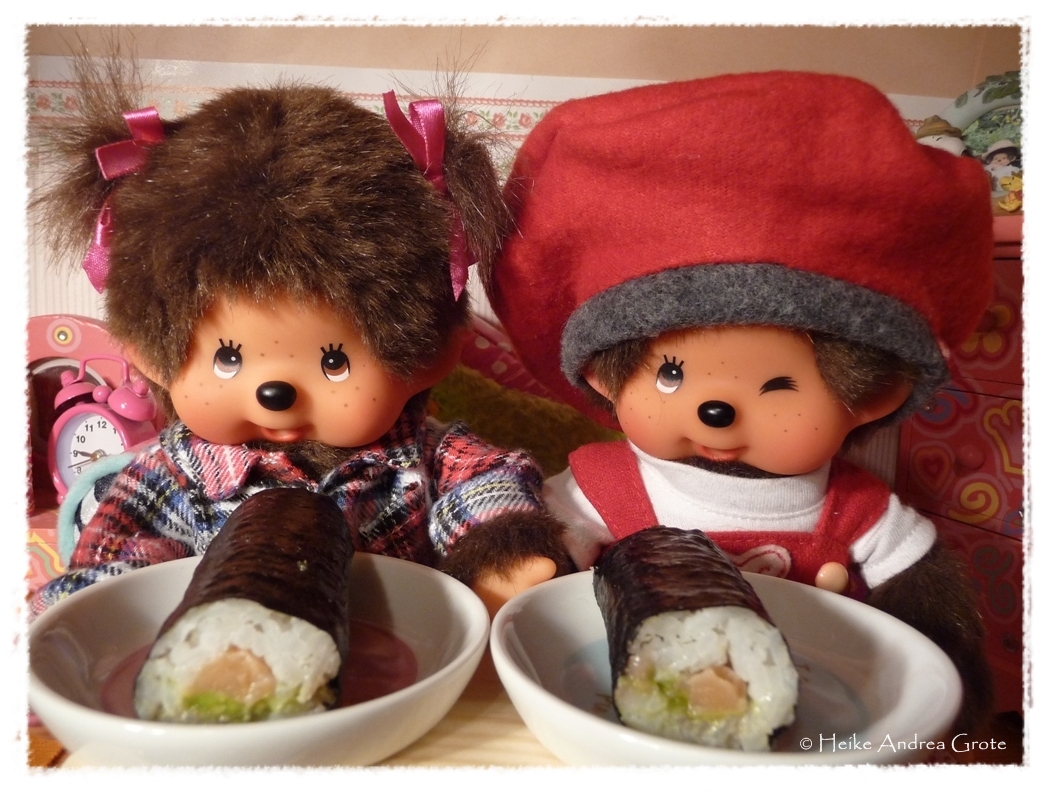 The Eho-Maki should be eaten in silence while facing the yearly lucky compass direction,
determined by the zodiac symbol of that year.
Every year there is a new direction.
In the year 2013 it is “south-southeast”. 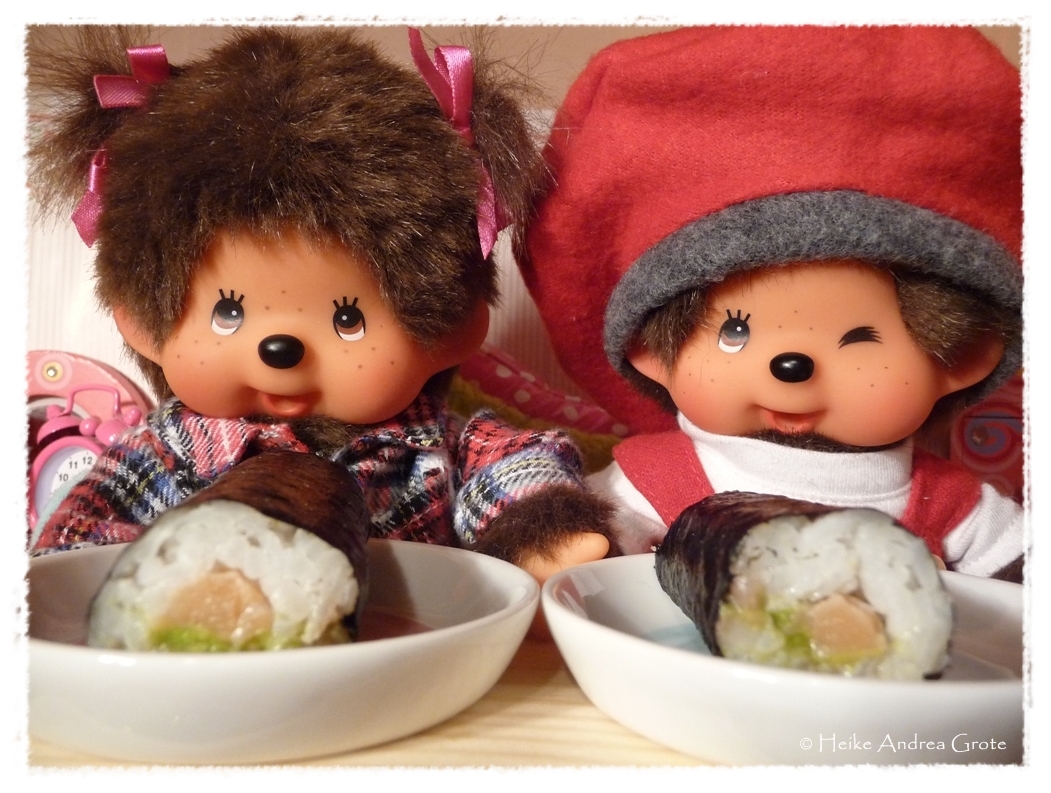 While the people eat they are not allowed to talk,
because they have to focus on their dreams and goals for that year. 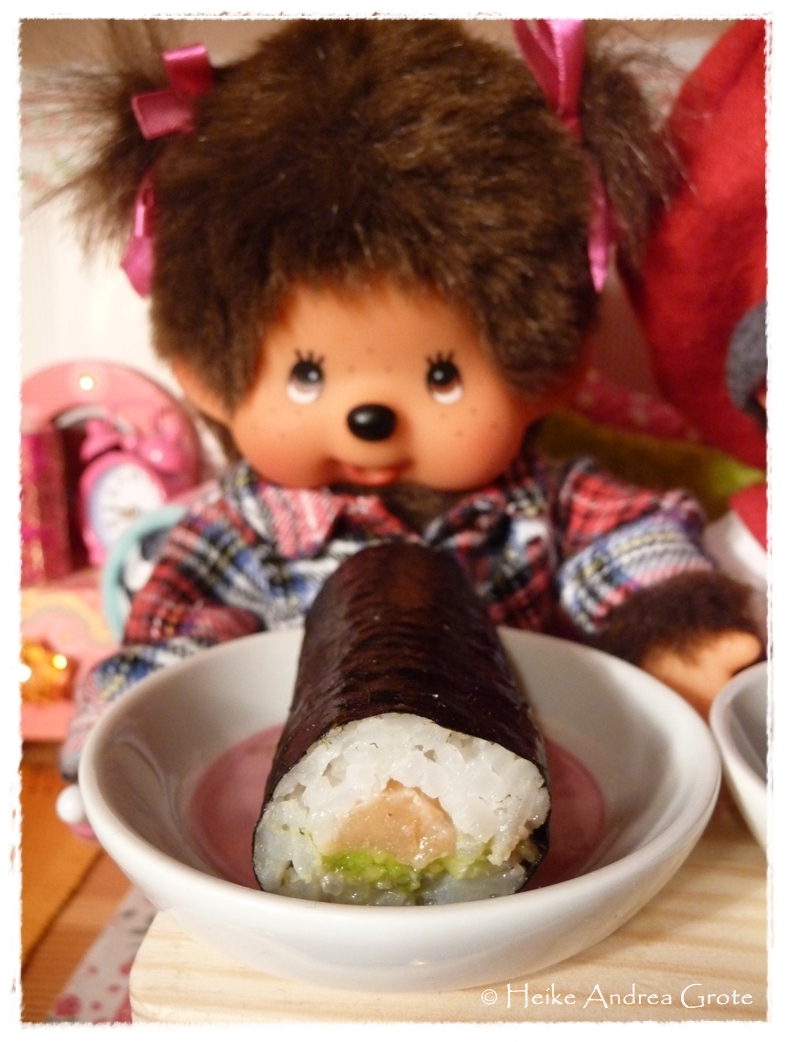 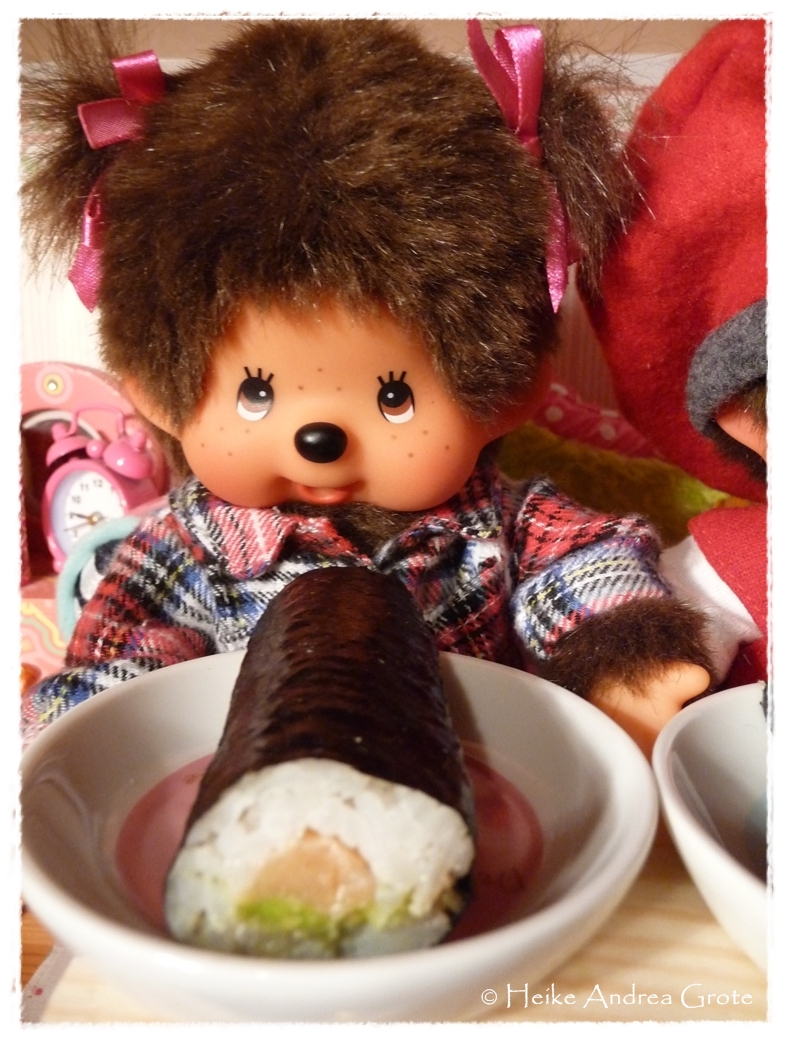 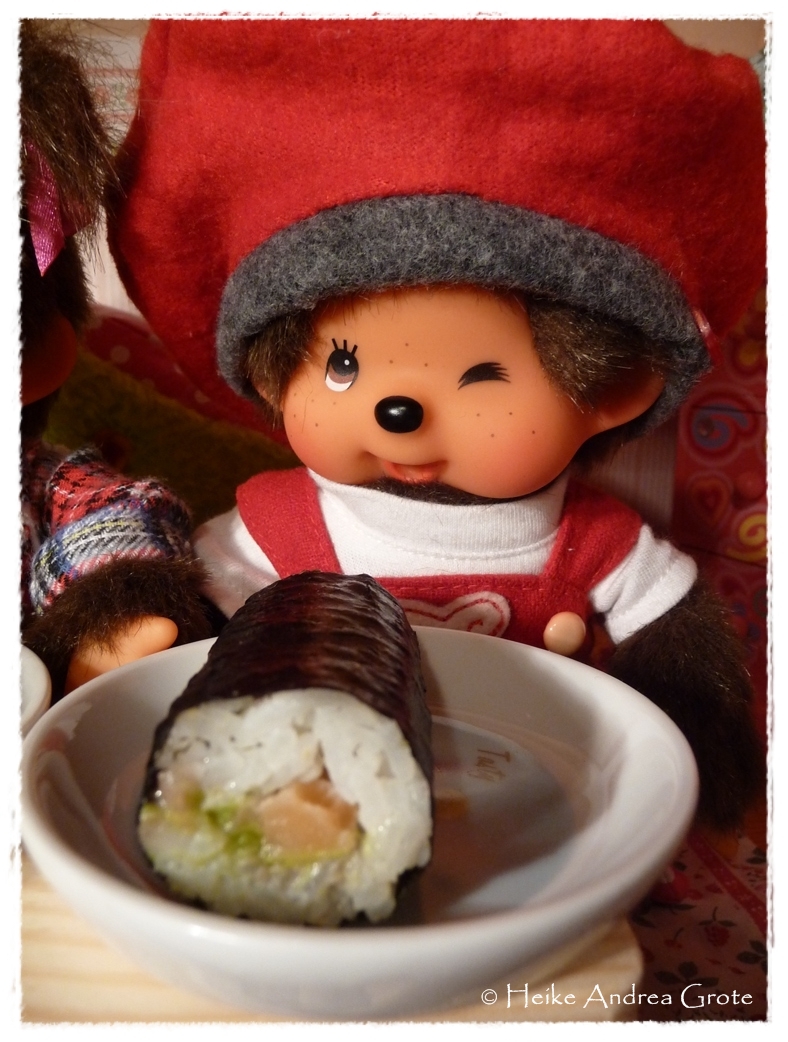 1. Face the lucky direction ( Eho)of the year.
2. Eat an entire Sushi Roll without stopping.
3. You shouldn't speak until you are finished with the sushi.
It's said that good fortune will be gone if you speak.

Eho is a direction which causes the fortune of the year.
Eho changes every year, and it is south-southeast direction in 2013. 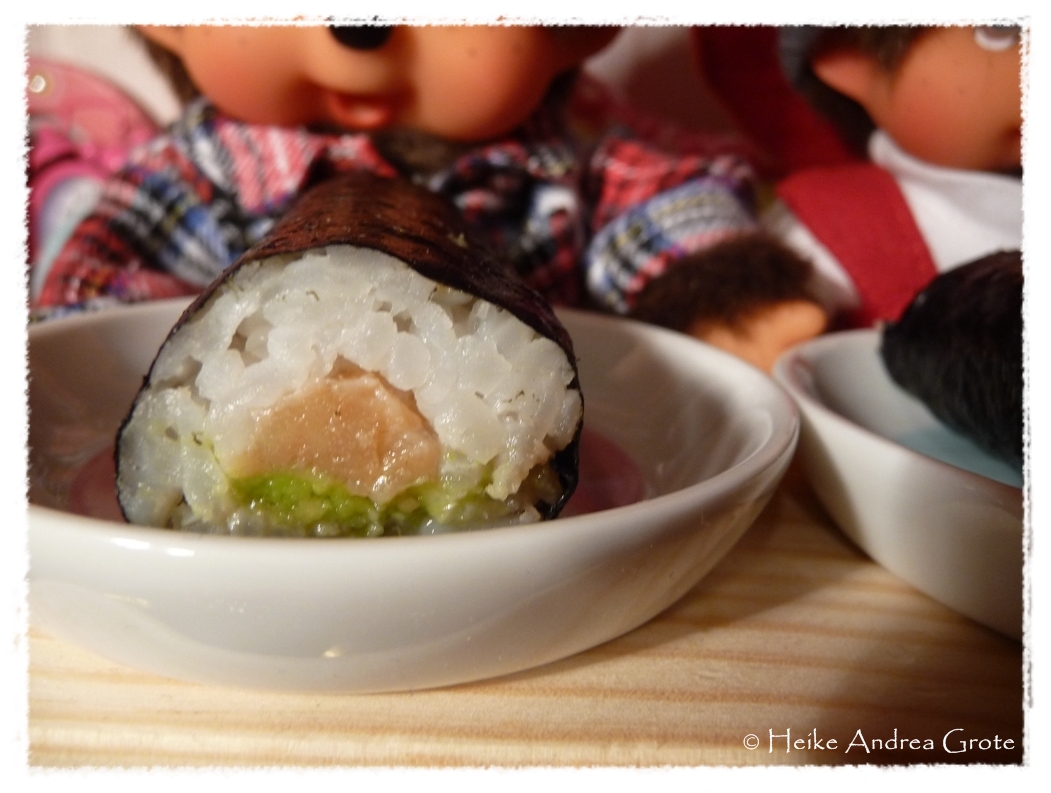 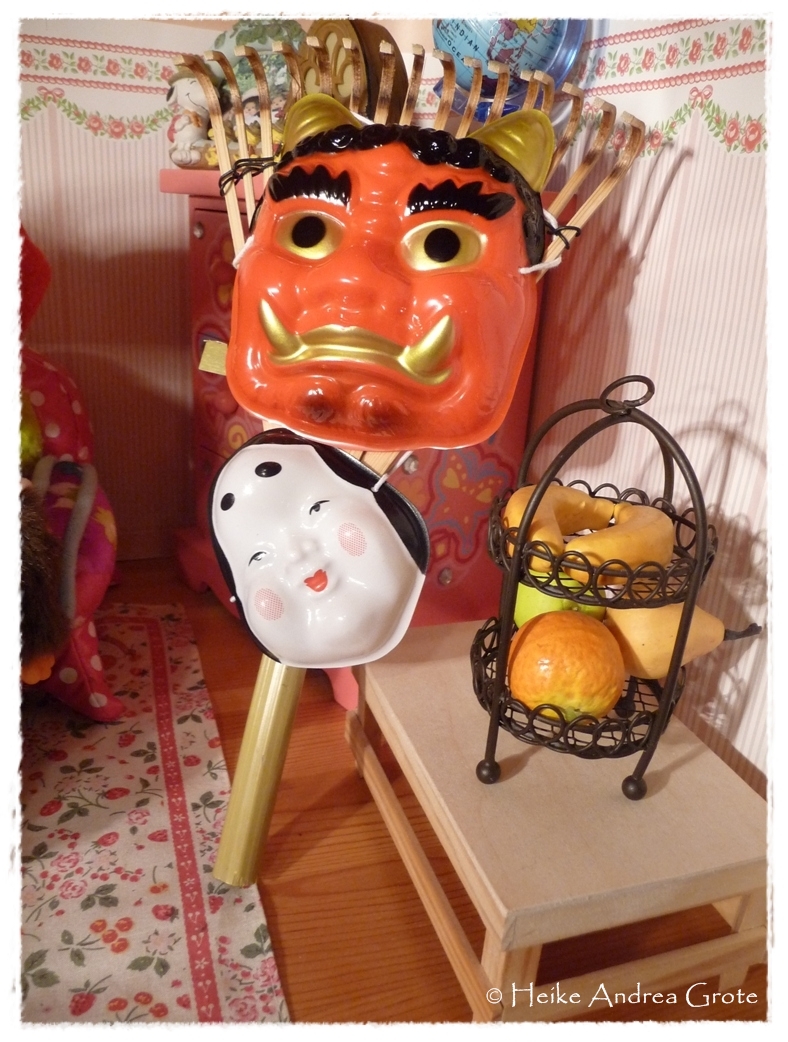 Setsubun-kumade (a rake) (節分熊手) has the meaning of gathering up happiness.
Here yon can see the devils mask on the one side and
the smiling face of a woman on the other side. The woman is named "Otafuku".
"Otafuku" is the Goddess of Joy and the principal at the Setsubun festivity
Her smile dispels evil with a laugh and a giggle.


Setsubun Festivals at temples and shrines

At Buddhist temples and Shinto shrines all over the country, there are celebrations for Setsubun.
Priests and invited guests throw roasted soy beans (some wrapped in gold or silver foil),
small envelopes with money, sweets, candies and other prizes.
In some bigger shrines, even celebrities and sumo wrestlers will be invited;
these events are televised nationally.
When People visit a shrine at the day of the Setsubun festival
they go through the Otafuku face (smiling face of a woman) installed on the shrines gate.
Then they go into the shrine to pray, get rid of bad luck and attend the bean throwing ceremony.
Not only people throwing beans but also devils dancing and monsters paying visit to the shrine!
Adults as well as kids can enjoy the festive mood of the shrine, trying a lottery and nibbling on stall foods.

Setsubun price could be a Mini Setsubun Set 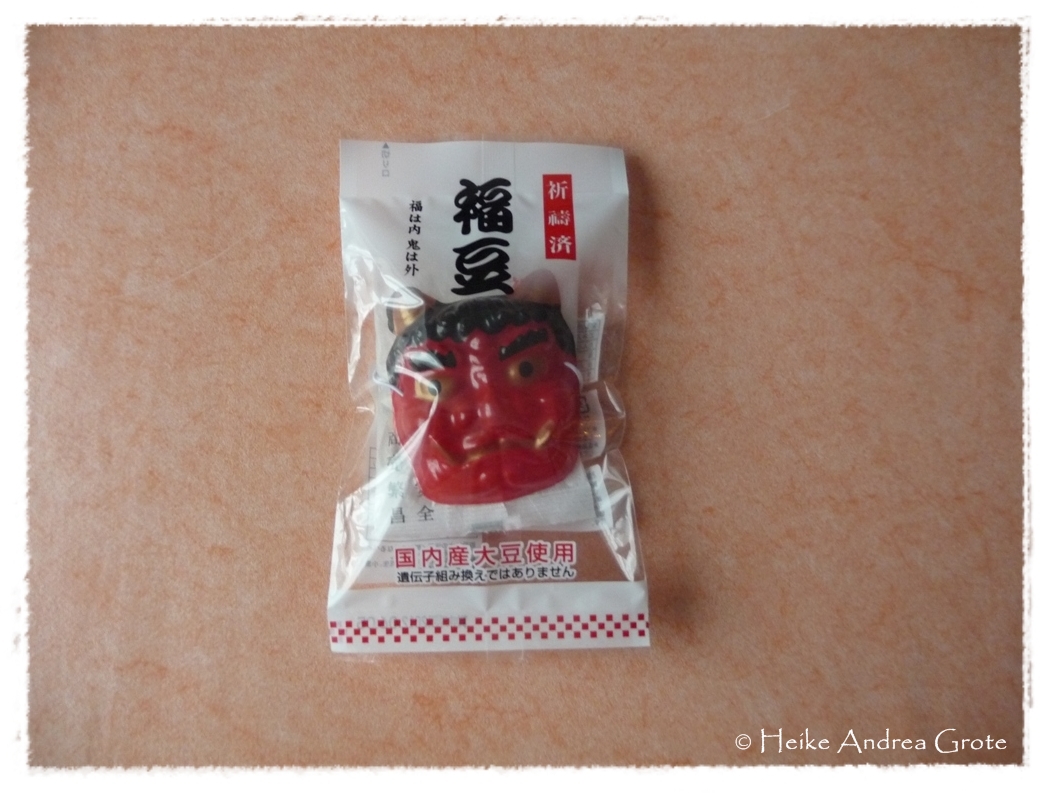 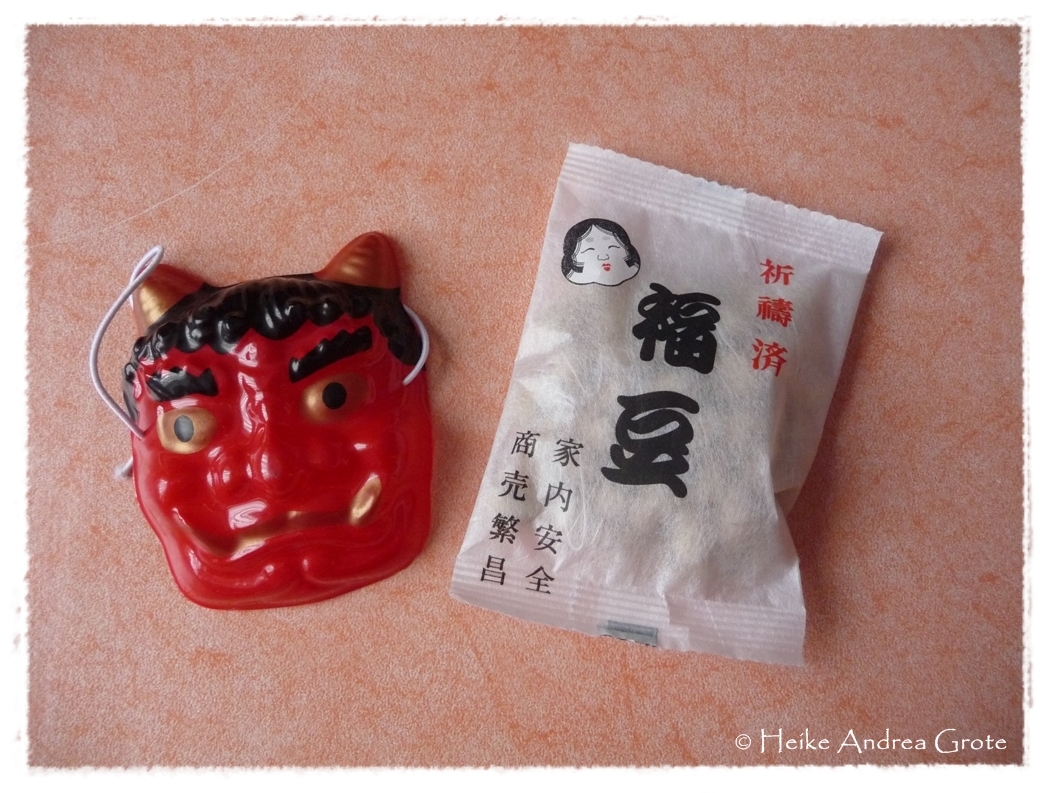 This is a Mini Setsubun Set which could be one of the items,
which are thrown in temples and shrines at that special day.
It contains a demon mask and roasted soybeans in a bag. 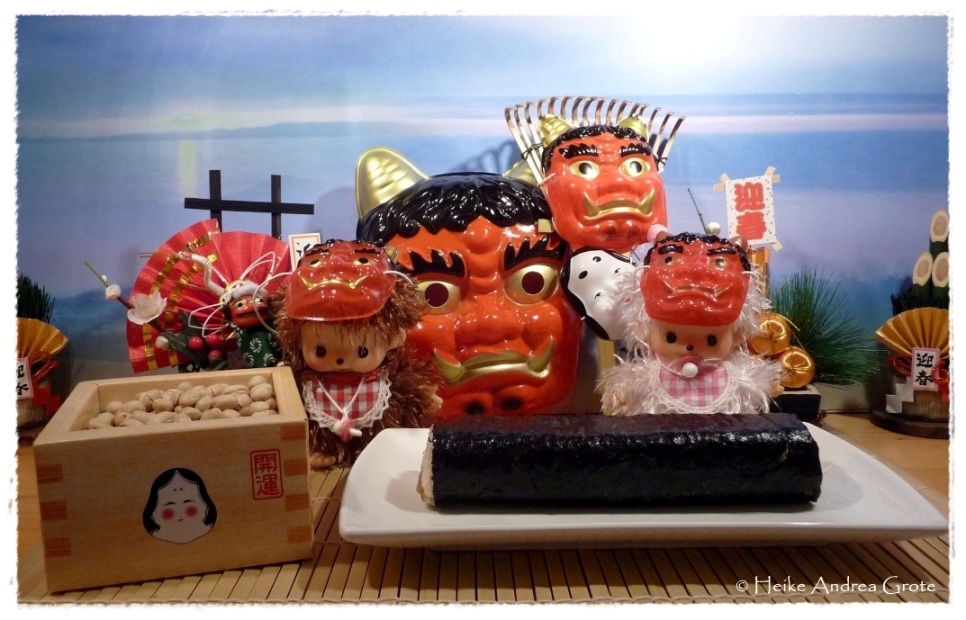 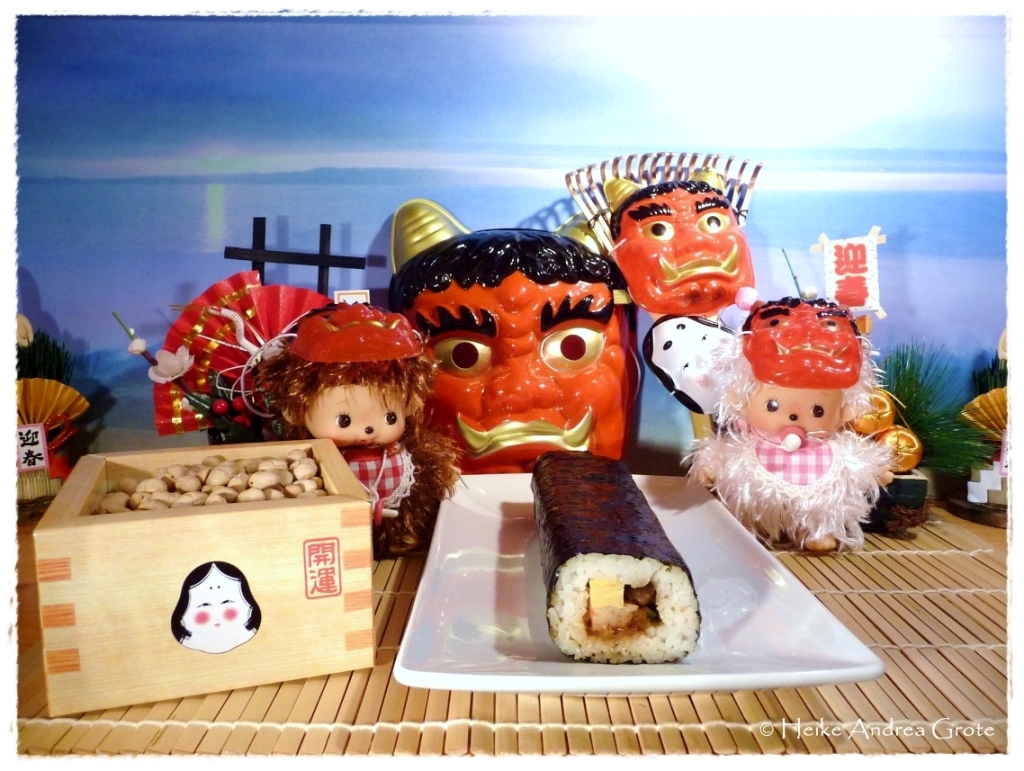 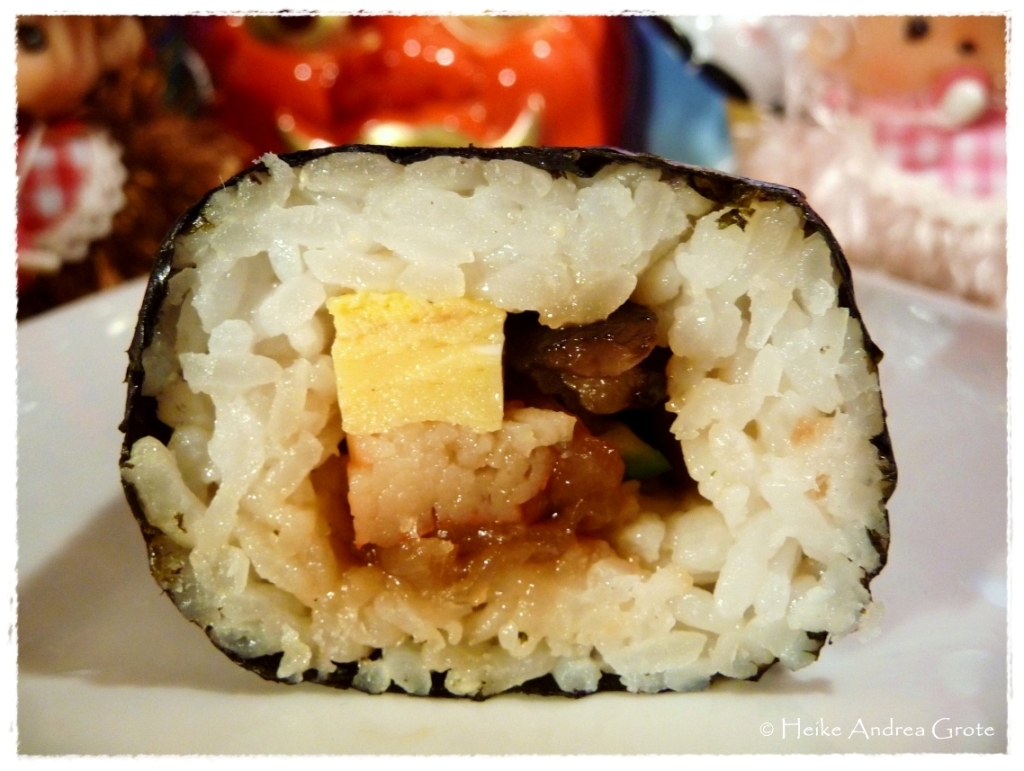 Wooooooow!! This is a task. Bon Appetit!

Mamemaki by children at kindergarden or school at Setsubun

Receipe of how to make Eho-Maki


Setsubun festivals at temples and shrines 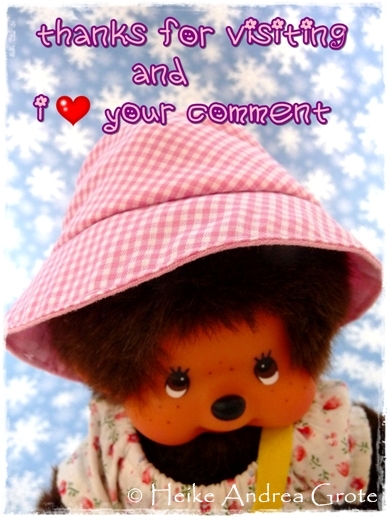 A big "Thank you" to Kaoru and Emiko for the Setsubun decoration and the information about that day.

Copyright of the Monchhichi photos by Heike Andrea Grote. You are not allowed to copy or publish it. Thank you.

back to My Monchhichi Photo Gallery